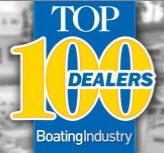 Boating Industry named its Top 100 marine dealers on Wednesday, November 18th at the annual Marine Dealer Conference & Expo in Orlando, FL. Of those named to the Top 10, half were IDS customers.

“As the Top 100 enters its second decade, the dealers on this year’s list are healthier than they have been in years,” said Boating Industry editor-in-chief Jonathan Sweet. “The 2015 Top 100 and Hall of Fame topped $2.5 billion in total sales — the highest total for the Top 100 since 2008.”

“Congratulations to all of the Boating Industry Top 100 Award winners. I see a lot of great people on this list,” said IDS General Manager Sean Raynor. “These dealerships have earned this recognition and we are proud that the IDS system is inspired by feedback from these top organizations. These dealers help make our product better.”